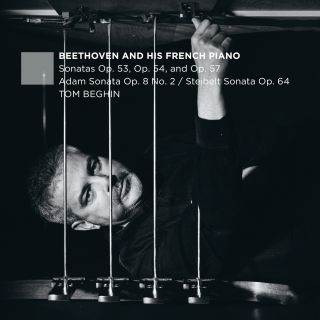 Beethoven and his French Piano

Catalog number: EPRC 0036
Releasedate: 06-11-20
- First recording ever on the first (and brand new) replica of Beethovens Erard piano.
- Extensive booklet of 130 pages.
- This release tells the story of a "French" Beethoven; someone who related to what happened in Paris through the piano's technology. Demonstrated by putting his work next to two unheard pieces by Louis Adam and Daniel Steibelt.
- A discovery of two French contemporaries of Beethoven. An ode to the French early-romantic era.

In 1803 Beethoven received a piano from Erard Frères in Paris. Why had he been so keen to own a French instrument and how did it inspire him, both as a pianist and a composer? The answer may lie in these performances on a new replica of Beethoven’s French piano, created as part of a unique research project. Placing the iconic “Waldstein” and “Appassionata” sonatas alongside equally grand pieces by two of his Parisian contemporaries, they reveal an unfamiliar French aspect to Beethoven’s genius.

The Belgian-Canadian pianist Tom Beghin combines a career as a performer with that of a researcher and teacher. His expertise concerns historically informed performance on eighteenth- and nineteenth-century keyboards. His published work spans various media, from commercially released CDs to academic essays and books.

Most recently, he has studied the significance of Beethoven’s 1803 Erard piano. Beethoven’s other “foreign” piano, a replica of his 1817 Broadwood, was featured on Inside the Hearing Machine, a multimedia project that aims to understand the connection of the composer’s deafness with his late piano music. His mon- ograph The Virtual Haydn: Paradox of a Twenty-First-Century Keyboardist (University of Chicago Press, 2015) followed his monumental recording of the complete solo Haydn keyboard works (Naxos 2009/2011). With classicist Sander Goldberg he co-edited Haydn and the Performance of Rhetoric, winner of the 2009 American Musicological Society Ruth A. Solie Award.

Alumnus of the HIP-doctoral program at Cornell University (where he studied with Malcolm Bilson and James Webster), Prof. Beghin taught at UCLA (1997–2003) and McGill University (2003–18). He was William J. Bouwsma Fellow at the American National Humanities Center (2002–3), has served on the board of directors of the Westfield Center for Historical Keyboard Instruments, is Mitglied of the Haydn Institut (Cologne), and member of CIRMMT (Centre of Interdisciplinary Research in Music Media and Technology, Montreal). He also serves on the Associated Faculty of the Arts of the University of Leuven.

Since 2015, Tom Beghin has been Senior Researcher and Principal Investigator at the Orpheus Institute for Advanced Studies & Research in Music, in Ghent, Belgium. His research cluster, Declassifying the Classics, focuses on the intersections of tech- nology, rhetoric, and performance. The cluster has a partnership with the Early Keyboard Workshop of Pianos Maene (Ruiselede, Belgium).