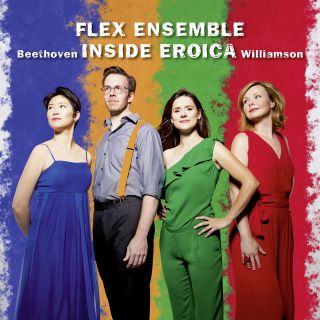 “You’re holding Flex Ensemble’s third album in your hands – Inside Eroica: an exciting programme that we are enormously proud to present! The following conversation between Martha Bijlsma and Gordon Williamson provides you with some insight into the creative process, our choices and how we landed Inside Eroica.

GW: This is an unusual recording... I’m struggling to think of other examples of chamber music groups playing arrangements of symphonic repertoire. What drew you to this transcription of Beethoven’s Eroica for piano quartet?

MB: When we first found out about an arrangement for piano quartet of Beethoven’s Third Symphony, we were of course very curious! It seemed exciting and perhaps a bit crazy to play an entire symphony with just the four of us, but in fact, in the days before recordings, it was very common to hear and play transcriptions. It was a way to get to know the latest symphonic works, even if you lived nowhere near a big town or city. But even though the idea of transcribing symphonies wasn´t new, for us it offered a totally different and fresh perspective on a very familiar piece of music. Knowing that Ferdinand Ries, who was both a student and a friend of Beethoven, transcribed it, reassured us that we weren’t committing any musical crime by playing it.…“ (From the booklet interview)

Known for their musically refined and highly energetic performances, the Flex Ensemble has been
thrilling audiences with programs ranging from Classical and Romantic piano quartet repertoire to
modern presentations featuring work by preeminent composers of our time, including Márton Illés
and Gérard Pesson.

They regularly collaborate with prominent artists such as Wolfgang Güttler,
Oliver Wille, and Albrecht Mayer.

The group founded the annual Chamber Music Fest Rheinhessen
in 2014 as well as the imPULS concert series in Hannover in 2016, and they continue to serve as
artistic directors for both.

The Flex Ensemble was awarded 1st Prize and the Special Prize for Interpretation at the International
Schumann Chamber Music Award in Frankfurt in 2013. They were also winners of the Gianni Bergamo
Classic Music Award 2015 in Lugano and the recipient of awards at the Kiejstut Bacewicz International
Chamber Music Competition in Łód ´z and the Premio Trio di Trieste.

The Flex Ensemble has appeared at venues such as the Concertgebouw Amsterdam, the Alte Oper
Frankfurt, the Beijing Performing Arts Center, and festivals such as the Sommerliche Musiktage
Hitzacker and the Heidelberger Frühling. Their performances have been broadcasted live on German
radio (SWR and NDR Kultur) and Dutch radio (Radio 4). In 2014 their debut CD The Arrival of Night
was released by GENUIN Classics, and in 2019 Au Suivant was released on CAvi-music in cooperation
with Deutschlandfunk Kultur.
www.flexensemble.com