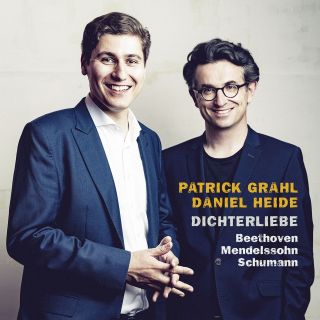 - Patrick Grahl is a young German tenor with a great potential to follow in the steps of Peter Schreier as a singer for Lied and Oratorio.
- It is the first solo Album of Patrick Grahl, covering a line of emotions (Grahl: if we allow the underlying emotions expressed in these songs to exert an immediate effect on us)
- Daniel Heide is currently worldwide one of the top 3 Piano partners for Lieder singer.

Even more than in Beethoven’s case, Mendelssohn’s Lieder were intended for performance in the salons of the prosperous bourgeoisie: a convivial circle of highly qualified connoisseurs who shared the same outlook, and often a similar financial status.

Those members of the upper middle classes were the musical link and the sociological crossroads between Hausmusik and the concert hall. Mendelssohn often wrote songs as gifts for the friends he was visiting, frequently as settings of their own texts: the considerable technical challenges they contained still needed to be manageable for members of those circles.

Thanks to their songlike or folklike character, certain works by Mendelssohn (for instance from oratorios such as Elijah ) became true classics, even across broad swaths of the population. The narrower the compositional framework in his songs, the more noteworthy were Mendelssohn’s divergences: he often unobtrusively proved his mastery by varying upon a strict form (extending phrases or inserting small elements of surprise in strophic songs), thus providing variety, excitement, and ironic musical fractures.

Robert Schumann’s Lied output was probably more crucial for his existence than in Mendelssohn’s case, and likewise more significant due to the artistic dialogue he held with his wife Clara: songs thus took up a greater place in his life. Composed in Leipzig in 1840 (Schumann’s well-known “year of songs”), Dichterliebe Op. 48 on texts by Heinrich Heine offers an excellent example of Schumann’s use of a self-contained episode with a homogeneous poetic idea as a point of departure for an entire song cycle.

Thus he not only rearranged the order of Heine’s poems from the Lyric Intermezzo (published in 1827 as part of Das Buch der Lieder ), but chose the title Dichterliebe (“The Love of a Poet”) himself. Here the piano goes far beyond pure instrumental accompaniment: instead of merely illustrating the text, it provides its own dimension of interpretation as a partner on equal standing with the voice, both in terms of extension as well in terms of artistic niveau.

Patrick Grahl was born in Leipzig and was initially a member of the St. Thomas Choir under Georg
Christoph Biller; he then went on to complete his vocal training at the Academy of Music in Leipzig
with Professor Berthold Schmid, graduating with distinction in the master-class examination. Patrick
Grahl attended master-classes held by Peter Schreier, Gotthold Schwarz, Gerd Türk, Ileana Cotrubas
and Prof. Karl-Peter Kammerlander, which gave him decisive momentum for his artistic development.
In 2016 the tenor won First Prize at the XX International Johann Sebastian Bach Competition in
Leipzig.
He is already much in demand as an oratorio and concert singer, and has been invited to perform as
soloist with orchestras such as the Leipzig Gewandhaus Orchestra, the Dresden Philharmonic, the
NDR Radio Philharmonic, the Gürzenich Orchestra Cologne as well as the Accademia Nazionale di
Santa Cecilia and the London Symphony Orchestra; he has worked with conductors such as Sir John
Eliot Gardiner, Daniele Gatti, Hartmut Haenchen, Ludwig Güttler, Ton Koopman, Philippe Herreweghe,
Andrew Manze, Omer Meir Wellber, Stefano Montanari, Hans-Christoph Rademann and Leopold
Hager. He still has close ties with the St. Thomas Choir of Leipzig and with the Dresdner Kreuzchor.
As an opera singer, Patrick Grahl makes guest appearances at outstanding venues including
the Opéra National de Lyon and as Don Ottavio in Mozart’s Don Giovanni at the Teatro La Fenice di
Venezia.
Until 2013 Patrick Grahl was a scholarship holder of the Friedrich-Ebert-Stiftung, Bonn. In 2014,
with the Ensemble Barockwerk Ost, he was the recipient of the Early Music Promotion Prize awarded
by the SR (Saarländischer Rundfunk) and the Saarland Academy for Early Music.
www.patrickgrahl.de

Born in Weimar, pianist Daniel Heide is one of the most sought-after vocal accompanists and chamber
musicians of his generation. He performs in recital series and festivals all over Europe as well as in Asia: for
instance, in the Konzerthäuser in Vienna, Berlin and Dortmund, the London Wigmore Hall, the Schubertiade
in Schwarzenberg and Hohenems (Austria), the Heidelberg Spring Festival, and the Oxford Lieder Festival.
In addition to his ongoing collaboration with vocalists including Andrè Schuen, Christoph Prégardien,
Simone Kermes, Ingeborg Danz, Britta Schwarz, Roman Trekel, and Tobias Berndt, he has also accompanied
lieder recitals with renowned singers such as Regula Mühlemann, Fatma Said, Benjamin Appl, Sheva
Tehoval, Dietrich Henschel, Dorottya Lang, Patrick Grahl, Katharina Konradi, Hanno Müller-Brachmann,
Luca Pisaroni, and Johannes Weisser.
He also loves sharing the stage with actors and narrators including Christian Brückner, Udo Samel,
Thomas Thieme, and Hanns Zischler in the genre of melodrama
Daniel Heide had a close collaboration with the late German-Greek mezzo-soprano Stella Doufexis.
Their CD Poèmes with songs by Claude Debussy was awarded the German Record Critics’ Prize.
As a chamber music partner in duo sonata recitals he has concertized with outstanding soloists
including Sabine Meyer, Tabea Zimmermann, Antje Weithaas, Wolfgang Emanuel Schmidt, Jens Peter
Maintz, and Danjulo Ishizaka.
Daniel Heide is the founder and artistic director of the vocal recital series Der lyrische Salon. Held in
Ettersburg Castle near Weimar, the series has existed since 2011 and is one of the few – anywhere
in the world – that is devoted exclusively to artsong. In that context he has collaborated with a great
number of celebrated soloists of the lied genre in over 60 recitals.
On CAvi-music he recorded with baritone Andrè Schuen, with songs by Robert Schumann, Hugo Wolf,
Frank Martin, and a Schubert album Wanderer; with Roman Trekel most famous Loewe Ballades and
with Stella Doufexis Hamlet Echoes.
www.danielheide.net