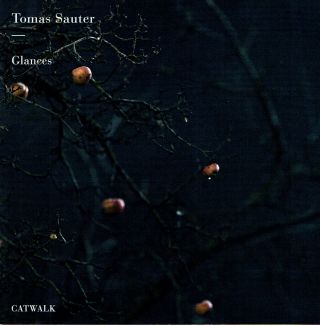 Catalog number: CW 2000202
Releasedate: 06-11-20
- For "Glances", Tomas has written a repertoire that is so different from anything we have heard from him before,
- Brilliant interpretation of these treasures, recorded on a historic guitar from 1923 by the Spanish master builder Santos Hernandez
- "Glances" provides enthralling listening and sound experiences


For many years the guitarist and composer Tomas Sauter has surprised and convinced the audience again and again with stunningly distinct musical projects. Whether in a duo with double bass, trio, quartet or quintet, as composer, leader and instrumentalist Sauter always guarantees absolute authenticity and highest quality. He feels equally at home on the electric, jazz and acoustic guitar, but he has also amazed the music world on the electric bass of his brilliant band with trumpeter Ralph Alessi. He tastefully documents his work on wonderful recordings, which he releases on his own label CATWALK. With 20 albums, the brand stands for finest sound culture and exquisite artwork.

And now there is the solo album "Glances", on which Tomas Sauter delights all alone with music for classical and baritone guitar. One is tempted to say: finally! Sauter undoubtedly stands out from the mass of contemporary musicians in terms of inventiveness, creativity and versatility. Despite all his success, however, he has remained modest and has taken his time before setting off on his next musical adventure into unknown territories on his own.

For "Glances", Tomas has written a repertoire that is so different from anything we have heard from him before. This time all pieces are fully composed. The music floats organically, easily and naturally over long arcs of tension. Even though the jazz musician for once subordinates improvisation and interaction to the vision of a clearly composed sound architecture, he has written his new pieces based on improvised motives, sounds and moods. At the same time, one can hear in them that Sauter has long been engaged with and inspired by the forms and sounds of contemporary classical compositions.

No words need be spoken about the brilliant interpretation of these treasures. Virtuosity of course, but never degenerates into circus artistry. On the contrary, the music fascinates from the very first note and makes you completely forget how difficult it is to play, especially since the classical guitar is technically more demanding and offers more tonal possibilities than the jazz guitar. Sauter masters these challenges brilliantly, elicits unheard-of sounds from his instruments and thus opens up new artistic territory, on which he once again creates beautiful and at the same time exciting music.

Tomas Sauter is a great melodist, who is able to enchant an inconspicuous phrase into a catchy tune even in dissonant settings. But he is also an innovative sound researcher who experiments with unconventional moods and unusual strings. His baritone guitar, for example, has the range of the cello and opens up a fascinating spectrum of overtones and basses. Thanks to a fantastically deep-dimensional sound design, "Glances" provides enthralling listening and sound experiences. As on all previous albums, the CATWALK label has realized a clear sonic vision on the latest production, from recording to mixing to mastering.

• started playing the guitar at the age of ten years
• studied at the music college of lucerne from 1994-98
• from 1998 teacher at the "pop rock jazz" departement of the music conservatory of biel
• from 1999 lectureship for improvisation at the music college of biel
• 2002-03 master of music studies at purchase college, new york, usa
• studies with John Abercrombie, Hal Galper
• from 2004 professor for guitar at the HKB Jazz, Hochschule der Künste Bern
Awards:
• award at the international meeting of jazz in frauenfeld "generations 98"
• diploma with honor at music college lucerne
• dr. medicus scholarship 2002