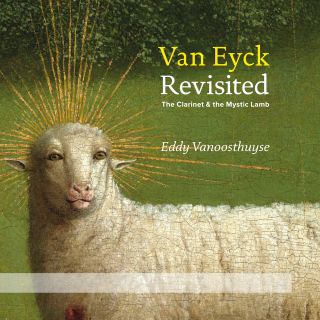 Behold the Lamb of God, or better still: listen to it. At the invitation of clarinet virtuoso Eddy Vanoosthuyse, three Belgian composers translated Flanders' most famous painting in new music. Alain Crépin's dazzling Lamb Gods Impressions are performed on clarinet by the commissioner himself, with Elisabeth Competition winner Vitaly Samoshko at the piano. Johan Duijck conducts the Flemish Radio Choir in his ethereal L'Homme Désarmé, while Dirk Brossé unveils The secret of The Mystic Lamb, a marvellous quest in which the Brussels Philharmonic sparkles alongside Vanoosthuyse’s solo clarinet. Listening to the Lamb: a divine delight.

Eddy Vanoosthuyse (1959) descends from a musical family in Kortrijk. His father coached him in his earliest musical adventures, after which he embarked on a course that was completed at the Royal Conservatory of Ghent. What follows was a dazzling journey along orchestras, and a career as a soloist and teacher. Vanoosthuyse was a soloist with dozens of orchestras and he often created works by famous composers such as Arturo Marquez, Nicola Piovani and Oscar Navarro, but also by Belgian masters such as André Laporte, Wim Henderickx and Frits Celis, to name but a few. Eddy Vanoosthuyse has recorded doz- ens of CDs and he is a regular guest on radio and television. In addition, he is professor

at the Ghent Conservatory, at the Fontys Institute in Tilburg, and he teaches international masterclasses on all continents.