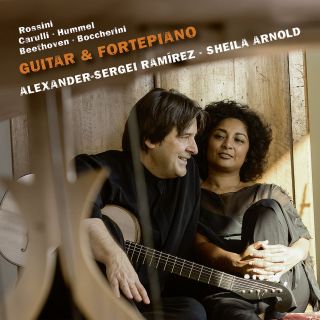 - Sheila Arnold & Alexander-Sergei Ramirez are concentrating on a short period of music – The Biedermeier. Very usual combination of instruments for a charming music.

- Using period instruments, the copy of a Biedermeier Fortepiano and the “Biedermeier guitar, a special species with a smaller but mor charming sound as the concert guitar

- Sheila Arnold and Alexander-Sergei Ramirez are married, they found together especially over that combination of instruments during their time of studies.

Greetings from the Biedermeier times

PERSONAL NOTES by the artists

What was your first encounter with “historical” instruments?

Sheila Arnold [SA]: Everything began in the late 1990s, attending a masterclass at the Schleswig-Holstein Music Festival. There I met a handsome young guitarist from the class of Pepe Romero. The young guitarist, for his part, was not entirely uninterested in an Indian pianist from the class of Lev Naumov. Pepe soon realized what was going on. He gave Alexander the score of a piano/guitar duet and said: “Go and find a pianist!” The title was full of innuendo: “Papageno wants a sweetheart”.

Alexander-Sergei Ramirez [AR]: No sooner said than done! At least sometimes I did what my teacher told me.

Many years went by as a couple until we actually started making music together. The guitar and the piano are entirely autonomous harmonic instruments that do very well by themselves, or combine ideally with melody instruments.

SA: Our musical approaches are nonetheless quite similar. Eventually we did try out that duet by Mozart/Beethoven/Carulli – but on our modern instruments. Due to their entirely disparate sonorities, the musical liaison was doomed to fail. The piano had to play softly all the time, or not play at all; the guitar was constantly forced to sound as loud as possible. That couldn’t turn out well. Neither of us could elicit any trace of musical charm or start to make nuances in terms of timbre.

AR: Indeed! They were written in the early 1800s for fortepiano and Romantic guitar, also called “Biedermeier guitar”. Instruments in the 1810-1850 period were built much more intricately and minutiously than their more voluminous siblings of today.

(excerpts from the line notes)

THE DUO
Sheila Arnold & Alexander-Sergei Ramírez have been concertizing in the rare fortepiano/guitar combination
for several years.

Their duo has been invited to a number of festivals including Spannungen in Heimbach,
the Villa Domergue Festival in Cannes, the Euriade Festival in the Netherlands, and the Schubertiade in
Roskilde (Denmark).

They have also performed recitals in the Torre Tagle Palace (Lima, Peru) and in the
presence of members of Japanese Imperial family. They have also made a great number of recordings
and live productions for European broadcasting stations (WDR Cologne, Deutschlandfunk, Belgian Radio,
and Danish Radio).

Ramírez is a D‘Addario artist.

FRIEDERIKE V. KROSIGK, castanet
After having studied dance and theatre in Berlin and in Spain, Friederike v. Krosigk founded her own
theatre company, the Ensemble Theatrum, in 1996, and settled in the 800-year-old castle of Hohenerxleben
in Saxony-Anhalt.

Friederike v. Krosigk performs theatre productions in churches and theatres
all over Germany, including the Gewandhaus in Leipzig. Her unique performances on the concert
castanets (in classical music, world music, and jazz) have impressed audiences in several European
countries.

She has performed with the Gewandhaus String Quartet, with the Akademie für Alte Musik
Berlin, and with the Young Philharmonic Orchestra of Venezuela under the baton of Gustavo Dudamel.

Her art of castanet playing has likewise been featured on European broadcast television (ARTE).