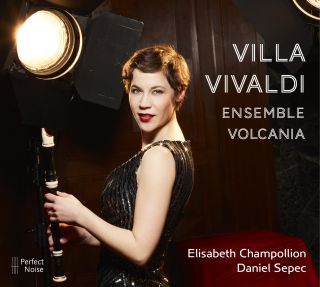 Every moment on stage can be made into magic: this is Ensemble Volcania’s core belief.

The international musician-adventurers of the ensemble led by Elisabeth Champollion

and Franciska Anna Hajdu find glamor, heat, and joy in the scores of Vivaldi, Bach and

other past masters – and commission compelling new music from living composers,

In its work, the ensemble places connection in the foreground: that of the musicians

to the music, potentially leading to a different musical result each evening; and of the

musicians to the audience, sparking the unique excitement of live performance.

Elisabeth Champollion traverses the intersection of

Early and New Music with her ensemble Volcania.

As a soloist and ensemble musician, she has toured to festivals such as the MDR

She is the artistic director of the Bremen concert series “Gröpelinger Barock”, a firstprize

winner of the competition for solo recorder in Nordhorn, and, with her chamber

music ensembles PRISMA and Boreas Quartett Bremen, the recipient of many other

In 2011, she was a fellow of Concerto21, an academy centered around innovative

She teaches recorder and coaches ensembles on a regular basis, privately as well as

at the University of the Arts in Bremen and the Internationaler Arbeitskreis für Musik,

Daniel Sepec is concertmaster of the Deutsche Kammerphilharmonie

Bremen, a position he has held since 1993. He also performs regularly as a soloist with

CD recordings, one with works by Johann Sebastian Bach and another with Antonio

As a guest concertmaster, he has collaborated on many occasions with the Chamber

Orchestra of Europe (including a tour with Claudio Abbado), the Camerata Academica

Salzburg and the Ensemble Oriol Berlin.

His solo appearances include performances with the Academy of Ancient Music

under Christopher Hogwood, the Wiener Akademie under Martin Haselböck, and the Orchestre des Champs-Elysées under Philippe Herreweghe.

His recording of H. I. F. Biber’s Rosary Sonatas received the annual award of the

German Record Critics. Up to now, Daniel Sepec is the only musician to have recorded

a CD playing on a recently rediscovered violin that belonged to Ludwig van Beethoven,

a project he undertook together with the pianist Andreas Staier.

From September 2010 to July 2014, he taught as a professor at the Basel Academy

of Music. In 2014, he accepted a professorship at the University of Music in Lübeck.