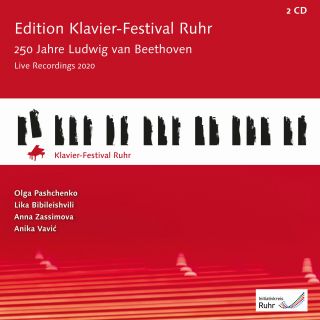 Catalog number: AVI 8553327
Releasedate: 22-01-21
-The unusual 2 CD set gathers basically most of the concerts which have taken place to the restricted shutdown of the Corona pandemic
- Most of the Beethoven pieces are only known to connoisseurs and collectors
- Again young pianists have been invited to record those unknown pieces.

250 years of LUDWIG VAN BEETHOVEN
The concert season of the Ruhr Piano Festival 2020 has suffered heavily under the Corona pandemic shutdown – loosing more than 85% of all scheduled concerts.

In the late June/July days some concerts had taken place, some were live recorded; some concert also had taken place in the early autumn 2020, before the entire new planning was cancelled as well for all 2020, like for so many other concerts and festivals.

At least the few live recordings are showing an interesting picture of a list of unknown piano works of Beethoven. It is therefore for sure a rich source for collectors and connaisseurs.

Born in Moscow in 1986, Olga Pashchenko began her musical training when she was six years old. Already at seven she won First Prize at the All-Russian Young Pianists Competition and gained enrolment in the Gnessin Music School for Young Talents, where she obtained her diploma with honors in 2005.

She continued her studies at the Moscow State Tchaikovsky Conservatory studying fortepiano and modern piano with Alexei Lubimov, harpsichord with Olga Martynova, and organ with Alexei Schmitov, leading to a diploma with distinction in 2010. In parallel, Pashchenko studied linguistics at Moscow University.

In 2017 she was appointed Professor of Fortepiano at the Sweelinck Conservatorium van Amsterdam. Her repertoire ranges from Bach (on the harpsichord) and Beethoven (on the fortepiano) to Ligeti (on the modern Steinway). Pashchenko is a regular guest at early and contemporary music festivals alike, including Utrecht Early Music Festival (where she was named Artist in Residence for the year 2016), the fortepiano festivals of Amsterdam, Zaandijk, and Zutphen, as well as Maggio Musicale in Florence.

She performs in outstanding classical music venues including the Concertgebouw in Bruges and the Cité de la Musique in Paris, collaborating with ensembles such as the Orchestra of the 18th Century, MusicAeterna Perm conducted by Teodor Currentzis, and Collegium 1704 under the baton of Vaclav Luks.

She gave her debut at the Ruhr Piano Festival in 2020 in a radio broadcast from the auditorium without the presence of an audience.

Born in the Republic of Georgia, Lika Bibileishvili was accepted into the piano class of Prof. Medea Shaladze at the Georgian University of the Arts in her home town of Batumi when she was only ten
years old.

Early solo appearances in piano concertos by Rachmaninov and Saint-Saëns at the ages of 12 and 14 testify to her exceptional talent. In 2008 she moved to Munich to pursue her studies at the University of Music and the Performing Arts; Bibileishvili received important counsel from her teachers Franz Massinger, Volker Banfield, and Antti Siirala.

After obtaining her Master’s Diploma with honors in 2015, she began post-graduate studies at the Salzburg Mozarteum. Legendary piano pedagogue Dmitri Bashkirov commended her
“extraordinary musical and intellectual abilities” after having heard her in a masterclass. Lika Bibileishvili holds a scholarship from the “Live Music Now” organization established by Sir Yehudi Menuhin.

She has been given numerous opportunities to perform both as soloist and chamber musician as part of its concert series.

Her début performance at the Ruhr Piano Festival took place in 2020.

Anna Zassimova not only studied piano in Moscow and in Karlsruhe; she also holds advanced university diplomas in art history and in musicology. The Moscow-born pianist has attracted widespread recognition with recordings of rare masterpieces by turn-of-the-century Russian composers: her name is particularly associated with the rediscovery of Russian-French composer Georges Catoire.

Zassimova’s monography on Catoire’s life and music was the first major publication on the subject, and her CD productions featuring his works have opened completely new perspectives on that fascinating pioneer of Russian Modernism.

Zassimova’s concert tours have led her to perform all over Russia, the US, and China, and she hasgiven solo and chamber music recitals at international music festivals.

She is currently piano professor at the Musikhochschule in Karlsruhe. After her acclaimed début in 2017 at the Ruhr Piano Festival, she returned for the third time in 2020.

Born in Belgrade, Anika Vavic´ has been living since the age of
sixteen in Vienna, where she studied with Noel Flores at the
University of Music and Performing Arts.

She also received important impulses from Elisabeth Leonskaja, Lazar Berman, Oleg Maisenberg, Alexander Satz and Mstislav Rostropovich. The winner of the
Second Steinway Competition in Vienna and its Special Prize for the best Haydn interpretation also received scholarships from the Herbert von Karajan Center in Vienna and the Gottfried von Einem Foundation. In 2002 the Austrian State awarded her the Women's Art Prize in the music category. Anika Vavic´ collaborates with
conductors such as Valery Gergiev, Paavo Järvi, Vladimir Jurowski, Hannu Lintu, and Mirga Gražinyte.-Tyla; recent career highlights include performances with the Mariinsky Orchestra, the London Philharmonic at the BBC Proms, and the Enescu Festival in
Bucharest. Vavic´ has performed at the White Nights Festival
in Saint Petersburg, at the Mikkeli Festival in Finland, at the
Schubertiade in Schwarzenberg, the Heidelberg Spring, and
Styriarte Festival in Graz.

Recital tours have led her to Carnegie Hall in New York, the Kennedy Center in Washington, Wigmore Hall in London, the Concertgebouw in Amsterdam, the Philharmonie in Cologne, the Cité de la Musique in Paris, the Philharmonie in Luxembourg, the Palau de la Musica in Barcelona, the Konzerthaus Berlin, and the Festspielhaus in Baden-Baden. Her chamber music partners include Gautier Capuçon, Patricia Kopatchinskaja, Carolin Widmann, Renaud Capuçon, and Daniel Müller-Schott. In 2005, Vavic´ performed the world première of Peras by Johannes Maria Staud.

The year 2020 marked her third appearance at the Ruhr Piano Festival.