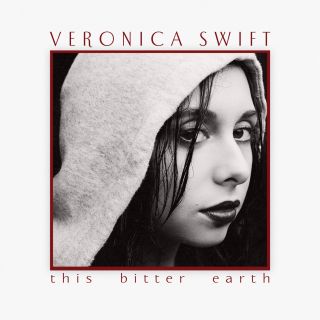 Whereas Veronica Swift's 2019 Mack Avenue Records debut, Confessions, contained songs that played out like pages from her personal diary, on this captivating follow-up, This Bitter Earth, she flips the script by crafting an ingenious song cycle that tackles sexism ["How Lovely to Be a Woman"], domestic abuse ["He Hit Me (And It Felt Like a Kiss)"], environmental issues, racism, xenophobia ["You've Got to Be Carefully Taught"] and the dangers of fake news ["The Sports Page"].
Accompanied by a team of kindred spirts that includes pianist Emmet Cohen, guitarist Armand Hirsch and flutist Aaron Johnson, bassist Yasushi Nakamura, and drummer Bryan Carter, Swift curates material that covers multiple genres, including jazz, American musicals, vintage R&B and contemporary rock.

At age 24, Veronica Swift is now being recognized around the country as one of the top young jazz singers on the scene.

In the fall of 2015, she won second place at the prestigious Thelonious Monk Jazz Competition. In 2016 she was asked to perform a concert of her own at the Tribeca Performing Arts Center in New York City and she was a guest artist with Michael Feinstein at Jazz atLincoln Center with the Tedd Firth Big Band and Marilyn Maye and Freda Payne. Veronica’s first appearance at Jazz at Lincoln Center was at age 11 when she performed at the “Women in Jazz” series at Dizzy’s Club Coca-Cola.

In the summer of 2016 she headlined at the Telluride Jazz Festival, her 10th appearance there – but her first as a headliner.  She first appeared there at age 10 with Dave Adams’ Young Razzcals Jazz Project and the great saxophonist Richie Cole and later she sang a duet with the featured artist, Paquito d’Rivera.  Then in April, 2017 she started her residency a the infamous Birdland Jazz Club in New York City.  On into 2018, Veronica began touring with her trio (Emmet Cohen Trio) as well as Benny Green Trio, Wynton Marsalis and Jazz at Lincoln Center Orchestra, and Chris Botti appearing at Jazz Showcase, Monterey and Montreal Jazz festivals, two runs at Jazz at Lincoln Center: Shanghai, China, and Marians' Jazz Showroom in Bern, Switzerland.

Veronica grew up on tour with her parents, renowned jazz pianist Hod O’Brien and celebrated jazz singer and educator/author Stephanie Nakasian.  It was with them where she first appeared at The Jazz Standard, and Dizzy's Club Coca-Cola.  Veronica recorded two CDs as a child – one at age 9 with Richie Cole and her father’s rhythm section and her mother, and one at age 13 with saxophonist Harry Allen.

Her 2015 Album “Lonely Woman” features some of the hottest young jazz players on the scene including Emmet Cohen, Benny Bennack III, Daryl Johns (with whom she shared the Grammy Choir/Band experience), Matt Wigler, and Scott Lowrie.

In addition to performing the Great American Songbook and Bebop and Vocalese classics, Veronica is also a passionate devotee of 20s and 30s music and has sung with Vince Giordano, Terry Waldo, and Drew Nugent.

Veronica will be releasing her next album on Mack Avenue Records in early 2019, which will feature the great pianist Benny Green and his trio as well the Emmet Cohen Trio.