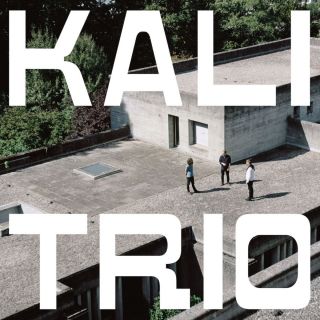 Catalog number: RON 026
Releasedate: 05-03-21
- All music written and arranged by KALI Trio
- KALI Trio is a discovery: the sound mixes and dramaturgical tension fields of this young band are impressive". Jazz Festival Willisau
- "KALI Trio forms its own magical sound with great sensitivity, catapulting the listener into other spheres and leaving plenty of room for the new." Debra Richards, Music Journalist London

LOOM is the second album by KALI Trio and shows the consequent development of the original style of the working band. The three Swiss musicians Nicolas Stocker (drums), Urs Müller (e-guitar) und Raphael Loher (piano) weave the various threads of their stylistic background together with relish and fresh skilfulness on their musical loom. The music, created jointly as an organism, is continuously charged in the four tracks and in the overall dramaturgy of the album. It unfolds its rhythmic pull and its mysterious atmosphere in a subtle and inexorable manner. LOOM consists of only four compositions, but clocks in at a few seconds short of the 45 minute mark! It's a beast in scope, but airy (literally) in feel, hence easy to inhale. Each piece plays like the equivalent of a time-lapse of a looming cloud formation –a liquid progression of shifting shapes, changing density as well as shadow and light play.

By the virtue of working with subtle iterations of form and using extended swaths of time as the equivalent of a large-scale canvas, the material evokes the mechanics of trance music. The creative use of sound design and general choice of spartan aesthetics, albeit executed using acoustic instruments, emphasize styles club-inclined and tasteful. The overall effect is cinematic and mesmeric; a sonic documentation of a daydream unraveling. Although the music is emotionally gripping –defined by a dance-floor drive and a thick cinematic atmosphere –it's hard not to notice the craftsmanship and the skill level involved in bringing these songs to life. The song Folding Space, for example, is based on a pattern in 19/8 that turns around on the offbeat against the quarter note. Shipol, on the other hand, is predicated on constantly shifting piano, snare and bass drum accents, which make the song feel as if it were performed in 7/16, and not the standard 4/4 that it is. When asked to describe their music, the band came up with: “It falls somewhere between T.C. Boyle's prose and Tarkovsky's dream-like images." It makes sense! Because the point is not to wow listeners with technique, but to create an experience via deep affect.

Kali represents the fresh and deep spirit of a new post-genre generation of musicians. Nicolas Stocker on drums (also known from Nik Bärtsch’s Mobile and Marena Whicher), Urs Müller on guitar (also known from Sha’s Feckel) and Raphael Loher on prepared piano (also known from Sekhmet) are natives of a contemporary musical world in which prog groove, noise, new minimal, ambient and new classical chamber music are just dialects of a common language. They feel at home in a composed and simultaneously in a free improvised musical context and follow their musical intuition with a wide and non-ideological understanding of music history.