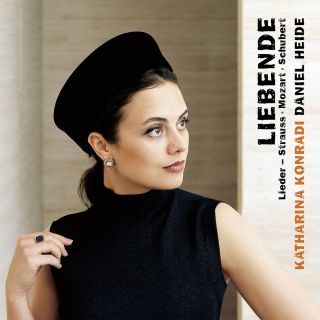 Liebende…..
Personal notes by the artists on the program, which focusses on the theme of „lovers“
Strauss, Mozart, Schubert – What do these composers mean to you?

Katharina Konradi
The labels “Mozart soprano” and “Strauss soprano” are often said to be practically indistinguishable. Indeed, in terms of melodic style, the two composers are not that far apart. Mozart suits my voice well, and the same is true of Richard Straus’s light lyrical repertoire.

Then Schubert, with his astoundingly vast lieder output and his variety of musical expression, holds a special place for me. Every time I prepare a recital, these almost inexhaustible treasures take me on a delightful journey of surprising discoveries, and that is what my life as a lieder interpreter is all about.….. Every piece on this CD has a special appeal for me.

Daniel Heide:
For a pianist, Mozart and Schubert are a matter of course! Mozart wrote a number of keyboard sonatas (and the violin sonatas!) along with a multitude of piano concertos: his Lieder come as an added attraction. They are marvelous gems. And any pianist who decides to go further than Schubert’s solo piano works in order to delve into his seemingly infinite world of 600 Lieder-treasures comes out a happier man.

In every Strauss song I find that the timbre is unique: an atmosphere you can experience only in Strauss territory, that special luminosity of sound, the silvery tone.……….

Mozart’s, Schubert’s, and Strauss’s songs are core German lieder repertoire, and they are pivotal and essential material for singers worldwide.

Katharina Konradi was born in Bishkek, Kyrgyzstan, and is the first soprano from that country to
have an international career as a lied, concert and opera singer.

Since the beginning of the 2018/19 season, she has been a member of the ensemble of Hamburg
State Opera, where she covers the major light lyric soprano roles onstage. In the same season she
made her début as Zdenka in Arabella by Richard Strauss at the Semperoper in Dresden.

In 2019 she
was recruited to sing the Young Shepherd in Tannhäuser at Bayreuth. In the fall of 2018 Katharina
Konradi was selected by the BBC New Generation Artists support and concert programme, and has
formed part of it ever since.
After having won First Prize at the renowned German National Music Competition (Deutscher Musikwettbewerb)
in 2016, Konradi was engaged to guest with renowned orchestras including the NDR Elbphilharmonie
Hamburg, Orchestre de Paris, Tonhalle Orchestra Zurich, MDR RSO, Deutsche Kammerphilharmonie
Bremen, and the Bavarian RSO, collaborating with conductors such as Manfred
Honeck, Paavo Järvi, Kent Nagano, and Daniel Harding. She is frequently invited to work together
with the Balthasar Neumann Ensemble and their conductor Thomas Hengelbrock.

Chamber music partners include the Schumann Quartet and Trio Gaspard. Katharina Konradi was
Rolando Villazón’s guest in the ARTE TV program Stars of tomorrow, and was also interviewed by
ARTE for a film documentary on Clara Schumann.
www.katharina-konradi.com

Born in Weimar, pianist Daniel Heide is one of the most sought-after vocal accompanists and chamber
musicians of his generation. He performs in recital series and festivals all over Europe as well as in Asia: for
instance, in the Konzerthäuser in Vienna, Berlin and Dortmund, the London Wigmore Hall, the Schubertiade
in Schwarzenberg and Hohenems (Austria), the Heidelberg Spring Festival, and the Oxford Lieder Festival.

He also loves sharing the stage with actors and narrators including Christian Brückner, Udo Samel,
Thomas Thieme, and Hanns Zischler in the genre of melodrama
Daniel Heide had a close collaboration with the late German-Greek mezzo-soprano Stella Doufexis.
Their CD Poèmes with songs by Claude Debussy was awarded the German Record Critics’ Prize.
As a chamber music partner in duo sonata recitals he has concertized with outstanding soloists
including Sabine Meyer, Tabea Zimmermann, Antje Weithaas, Wolfgang Emanuel Schmidt, Jens Peter
Maintz, and Danjulo Ishizaka.

Daniel Heide is the founder and artistic director of the vocal recital series Der lyrische Salon. Held in
Ettersburg Castle near Weimar, the series has existed since 2011 and is one of the few – anywhere
in the world – that is devoted exclusively to artsong. In that context he has collaborated with a great
number of celebrated soloists of the lied genre in over 60 recitals.

On CAvi-music he recorded with baritone Andrè Schuen, with songs by Robert Schumann, Hugo Wolf,
Frank Martin, and a Schubert album Wanderer; with Roman Trekel most famous Loewe Ballades and
with Stella Doufexis Hamlet Echoes.
www.danielheide.net