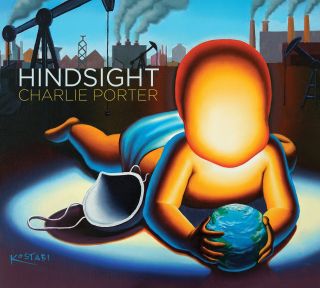 Catalog number: OA2 22186
Releasedate: 09-04-21
- "...one of the most brilliant and imaginative contemporary composers of mainstream jazz...stimulating and emotive original music with a rare blend of sophistication and organic spontaneity." - Chicago Jazz Magazine

Not a stranger to the idea of infusing one's art with examinations of societal conditions, Grammy-winning trumpeter Charlie Porter follows 2019's "Immigration Nation" with thoughts of how we act in hindsight to deal with the collateral damage of 'progress' and the centuries-old struggles with racism, inequality and corruption. Born during the upheavals of 2020, "Hindsight" reflects the tumult, uncertainty, and fiery emotions of the times, yet with the recent birth of his son, and thoughts of how we're going to leave the planet for the next generation, his "For Ellis" closes the album with a gospel choir and a hymn of hope. Joining Porter on the wide-ranging set of originals are saxophonist Nick Biello, pianist Orrin Evans, guitarist Mike Moreno, bassists David Wong & Damian Erskine, Behn Gillece on vibes, drummer Kenneth Salters, along with several guest performers. "Porter's playing is fluid, expressive, and magnificent." - DOWNBEAT

Internationally acclaimed trumpeter and composer Charlie Porter first cut his teeth on the New York jazz scene, while simultaneously studying classical trumpet performance at The Juilliard School under the tutelage of famed trumpeter and composer Wynton Marsalis. Charlie has since delved into many projects from jazz and classical to Arabic, Indian, African, Australian Aboriginal and Korean music, seeking to find common ground among all "good music" and avoiding the pigeonholing of genre labels.

Charlie has toured the world as a side-man and band-leader in jazz and also as a classical soloist and chamber musician, performing and recording with many notable musicians and groups over the last twenty years ranging from jazz greats like Joe Zawinul, Paquito D'Rivera, Charli Persip and Chuck Israels to classical artists such as Simone Dinnerstein, Sarah Chang, and Joyce DiDonato as well as world music greats Goran Bregovic, Marcel Khalife and Kim Duksoo, among many others. He is also a founding member of the grammy-nominated electro-acoustic Absolute Ensemble, directed by Kristjan Jarvi.

Porter holds degrees from The Juilliard School and Manhattan School of music in jazz and classical performance. He was also a Fulbright Scholar at the Paris Conservatory. Among many awards to his credit, Charlie was the first trumpeter to win 1st place in both the classical and jazz divisions of the National Trumpet Competition. As a composer, he has been commissioned by Chamber Music America and the Doris Duke Foundation.