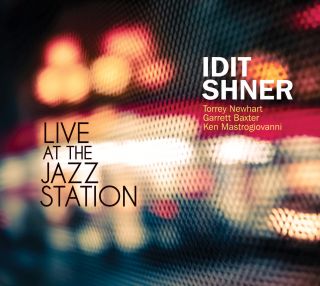 Live at the Jazz Station

Catalog number: OA2 22187
Releasedate: 07-05-21
- "...an excellent group of players jamming, meshing together fluidly, and the energy is consistently high...Shner's solos can twinkle and extend like Coltrane or honk and squawk like Big Jay McNeely..." All Music Guide
With her recorded projects ranging from post-bop arrangements of Israeli songs from youth to commissioned new works for classical saxophone, Idit Shner has been a tireless advocate for 'making things happen' since receiving her DMA from the University of North Texas 15 years ago. On the faculty of the University of Oregon in Eugene, Idit continues to inspire others while using the city's central jazz gathering spot, The Jazz Station, to workshop ideas and perform regularly with her quartet. Recorded in June, 2019, Live at the Jazz Station captures the joy and exuberance heard each night there, with a high-energy group of friends exploring a favorite standard or their own compositions. From pianist/organist Torrey Newhart's hard-swinging, B-3 led "Shake it 'Til You Hear it Sizzle," to bassist Garrett Baxter's haunting ballad, "Present," or drummer Ken Mastrogiovanni's loose and swinging closer, "Artificial Flavors," Shner lights a fire, making the idea of presenting a live album more than just a good idea. "...confident and assured. (Shner's) bringing a welcome liveliness to post-bop jazz..." - EMUSIC

An active performer of both jazz and classical music, Idit has played in various distinguished venues in the United States and abroad, such as The Kennedy Center in Washington, D.C. and Lincoln Center in New York.

Currently Shner plays with her jazz quartet in Eugene and Portland, Oregon. Her latest project involves nursery rhymes and ancient melodies from the Jewish liturgy performed in a jazz setting. In September 2008, her first jazz CD titled TUESDAY'S BLUES, will be released on OA2 Records.

Idit appears on "Music from SEAMUS Vol. 16," a compilation CD of music for instruments and electronic sounds by members of the Society for Electroacoustic Music in the United States.

During 2005-2006 Idit frequently played lead alto with Sherrie Maricle and the DIVA Jazz Orchestra. Performing her own compositions in a jazz combo setting, she was selected to participate in Betty Carter's Jazz Ahead (April 2005). In 2004 - 2005 Idit obtained the lead alto chair with the Two O'clock Lab Band, under the direction of James Riggs at the University of North Texas.

As an avid classical saxophonist Idit has commissioned and recorded new music and performed solo recitals in the US and Israel. In 2007 Idit performed at the Northwest Percussion Festival, Electronic Music Midwest, the North American Saxophone Alliance Region I Convention, and with the Oregon Symphony. During March 2006 she played in Israel as a featured soloist with a symphonic orchestra, and performed contemporary music at the national convention of the Society for Electro Acoustic Music in the US. Her last solo recital in Israel (January 2005) was broadcasted live on Voice of Music, a national public radio station.

Idit holds a Doctor of Musical Arts degree from University of North Texas. In 2006 Idit Shner joined the faculty of University of Oregon as instructor of saxophone and Jazz Studies.