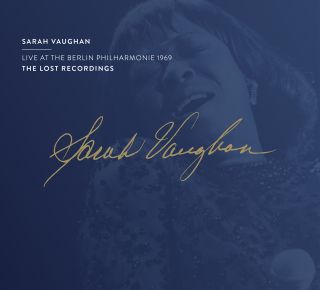 Live at The Berlin Philharmonie 1969

Catalog number: TLR 2004037
Releasedate: 09-04-21
- Never before released concert recorded on 9 November 1969 at the Berlin Philharmonie
- Beautiful record filled with standard like, My Funny Valentine, Fly Me To The Moon and many more
- Accompanied by Johnny Veith on piano, Gus Mancuso on bass and Eddy Pucci on drums

This two-fold recital, recorded on 9 November 1969 at the Berlin Philharmonie as part of what was then known as the Berliner Jazztage, took place at a particular phase of Sarah Vaughan’s career. For the first time ever, this double album brings us these moments of enchantment in their entirety, just as they were performed. In line with the practice of the festival at the time, Vaughan gave two public performances that same day.

These emotionally intense concerts are all the more remarkable because of the artist’s high wire act, a balance constantly maintained throughout between her professional savoir faire (a vocal technique at the apex of her art and her interpretive skills) and her emotional abandonment to the moment as she gives her all. The entire performance, with Vaughan pouring out her heart, seems in hindsight at once perfectly timeless in terms of its formal classicism yet thoroughly in the fleeting moment.

At the end of the day, these recordings are invaluable. As Vaughan explores the most lyrical, emotional aspects of her art, she overwhelms her listeners as she bares her soul. Her virtuosity in using her imagination to deploy all her technical skills and the extraordinary range of her tessitura are restrained rather than ostentatious. It is as if she has rid herself of the affectations that detracted from some of her earlier recordings, when the desire to appeal was too obvious. During the magical moments that make up these concerts, Vaughan treads a delicate line, maintaining a balance between naturalness and sophistication, simplicity and refinement. She literally reaches the stars and gives us a unique lesson in music as a form of the art of living.