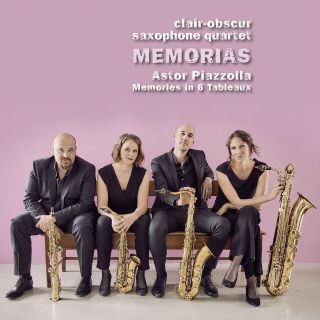 Memorias I
Memorias is clair-obscur’s birthday present for Astor Piazzolla, who would have celebrated his 100th birthday in 2021. A manera de memorias is the title of Argentinean author Natalio Gorín’s anthology of interviews with Astor Piazzolla from the 1990s.

That book gave us the idea to record this album, which provides the listener with comprehensive insights into Piazzolla’s musical environment. For the
album Memorias, clair-obscur has taken Piazzolla’s six most important musical models and placed their works alongside his own in six musical tableaux.

The connections can be easy to spot; at other times, they are more subtle. Invariably, however, a novel, unexpected musical context allows us to hear Piazzolla’s music in a different way, with a fresh approach. Each of these musical tableaux is introduced by an original interview quote from the book A manera de memorias.

Memorias II
Memorias is clair-obscur’s birthday present to itself. This is the tenth album that clair-obscur has recorded in its current line-up, and we release it on the occasion of the quartet’s 20th birthday in the year 2021.

Many of the pieces on this recording have long been part of clair-obscur’s core repertoire. Memorias is a musical retrospect of 20 years of making music together. (excerpt from the Booklet’s liner notes)

For many years, the clair-obscur saxophone quartet has been one of the most renowned ensembles of its kind, as proven by its appearances at Carnegie Hall, the Berlin Philharmonie, Lucerne Festival, and the Schleswig-Holstein Music Festival.

The top-notch musicianship of its individual members, who teach at several music universities and who regularly team up to form the Berliner Philharmoniker saxophone section, is heightened even more when they play together.

Clair-obscur was the first saxophone quartet to have been admitted to the chamber music exam at the Hanns Eisler University of Music in Berlin, where they were trained by Prof. Friedemann Weigle (Artemis Quartet). Weigle blended the four entirely different characters into a unity, giving them the
courage to think independently – the ability to “rock n’ roll”, as he put it. The quartet went on to win a series of national and international competitions.

Clair-obscur’s outstanding quality, flexibility, and stylistic assurance enable the quartet to tackle every kind of music style “without blinders” at top performance level. The ensemble knows no taboos, playing what pleases them the most and thereby continually proving that audiences can be
won over by any kind of music, provided it is well-played and well-presented.

It also has to sound good: clair-obscur writes ideal arrangements for itself (which are now being taken up by other ensembles), and they help the audience forget that all they have in front of them is “just a simple quartet”.

Thanks to clair-obscur’s unique sound, their congenially precise phrasing after twenty uninterrupted years of ensemble collaboration, and their laid-back, joyfully humorous stage presence, each of their recitals is transformed into an unforgettable experience.