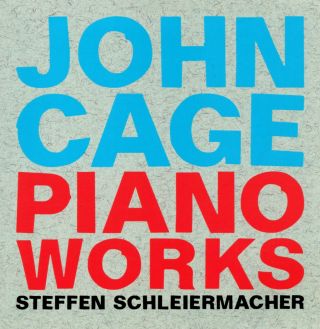 Catalog number: PHIL 06026
Releasedate: 07-05-21
- John Cage Piano works by Steffen Schleiermacher
In the last years of his life, John Cage wrote a great many so-called 'Number Pieces' – the title indicating the number of performing musicians. While most of these pieces indicate which instruments are to be played, as well as the sounds that are to be produced, other pieces offer only general tone descriptions or a framework for choosing the tones oneself. What these pieces do have in common is time-organization: Cage designates the measure within which the tones must be played. Should one play these sound-sequences within the interval quickly, then one must wait fort he beginning of the next measure in order to continue; should one play with an even slowness, the seperate intervals are joined without interruption. And so, each performance of the same piece is different: in one instance an even flow of sounds, in another a pulsation of rapid responses accompanied by pauses (including all variations). An exception is 'Two²'. Here the two pianists do not play according to a stopwatch, but ratherb y reacting to one another: Although the piece indicates measure, it does not assign tempo or even pulse. While both interpreters play indipendently of each other, they may continue on to the next measure only when the other player has finished his. Cage decided on teh number of tones within a measure by drawing upon the rules of Renga, Japanese linked poetry, in wich the number of syllables per verse are set at 5, 7, 5, 7, 7. As the pedal is continuously depressed, the notes sound into one another and this inner structure remains undetected.

Steffen Schleiermacher, pianist, composer, festival and concert promoter, born in Halle in 1960. He studied piano (Gerhard Erber), composition (Siegfried Thiele, Friedrich Schenker) and conducting (Günter Blumhagen) at the Felix Mendelssohn Bartholdy Academy of Music in Leipzig from 1980 until 1985. He was master pupil for composition with Friedrich Goldmann at the Academy of Arts in Berlin during 1986/87 and for piano with Aloys Kontarsky at the Cologne Academy of Music during 1989/90.

Concert tours have taken him throughout numerous European, South American and Far Eastern countries. Since 1988 he is in charge of the 'musica nova' series at the Gewandhaus Leipzig, in 1989 he founded the Ensemble Avantgarde. He led the January Festival at the Museum of the Fine Arts in Leipzig from 1993 until 2000 and the annual festival 'KlangRausch' at the Mitteldeutsche Rundfunk from 2000 until 2010.

Recent commissions include 'Nach Markus. Passion' for the Bach-Festival Leipzig.