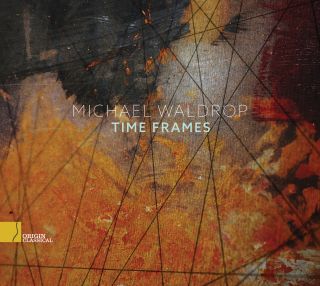 Catalog number: OC 33025
Releasedate: 03-09-21
- "...infused with influences from minimalism, popular music, and other styles and genres, but always informed with musical sensibility, harmonic sophistication and intelligence. Most importantly, Michael Waldrop is both a lifelong fan and staunch devotee of both mallet keyboard percussion and all things drumming."  - Gordon Stout
While featuring the marimba as a melodic instrument throughout "Time Frames," percussionist Michael Waldrop fully celebrates its origins as an African percussion instrument, creating provocative rhythmic undercurrents to offset his soaring melodies and improvisations. Surrounding himself with other renowned and musically diverse percussionists Gordon Stout, Brad Dutz, Jose Rossy and Marko Djordjevic, the heightened rhythmic colorings propel Waldrop's five original compositions. Jack Cooper's expansive "Three Mediterranean Views" gives space to pianist Steve Snyder, while two drumsets provide the hurricane power behind "Katrina’s Path." Famed marimbist Gordon Stout's "Incoming" is a virtuosic study for himself on marimba and Waldrop on drumset. Stylistically vast—from delicate, classical chamber music, to intricate, groove-laden marimba and percussion atmospheres, or ferocious waves of drums—"Time Frames" retains a musical center, one that revels in the deep, fundamental human connection to rhythm.
Michael Waldrop is a percussionist skilled in both the jazz and classical idioms. He excels in all aspects of percussion performance while specializing in drumset and mallet instruments.

Dr. Waldrop's career has been extensive and varied, ranging from rock and jazz styles to performances as a classical percussionist in symphonic, chamber music and solo recital settings. He was a member of the Grammy nominated One O'Clock Lab Band and recorded two CD's with the group and has been on several tours, including a European tour of the Broadway production "42nd Street," and a tour of Turkey with Prix di Rome prize-winning composer, Kamran Ince, and his ensemble. In addition, he has performed with Maureen McGovern, Della Reese, Randy Brecker, Marvin Stamm, the Nelson Riddle Orchestra, Eliane Elias and Slide Hampton. Dr. Waldrop was also a member of Blue Note Recording artist, Bob Belden's quartet. He has played and recorded with many of the greatest percussionists in the world including Gordon Stout, Neboisa Zivkovic and Airto. He has played on many recording projects ranging from the Warner Bros. movie, "Christmas Vacation," national commercial jingles and two CD's of original jazz (see audio links below.)

Dr. Waldrop was the Director of Jazz Studies and Percussion at Mesa State College in Colorado from 1999-2004. While in Colorado, he was Principal Percussionist with the Grand Junction Symphony as well as Director of the Western Colorado Jazz Orchestra. For the past two years he was Professor of Percussion at the University of Toledo. While there he performed in the Faculty Jazz group with legendary jazz vocalist, Jon Hendricks. He is currently a member of Jack Cooper's Jazz Orchestra of the Delta based in Memphis and was formerly a member of the Spokane-based Bob Curnow Big Band.

He is available for clinics and performances in both the jazz and classical percussion idioms and is an artist endorser for Vic Firth sticks and mallets as well as Yamaha percussion.