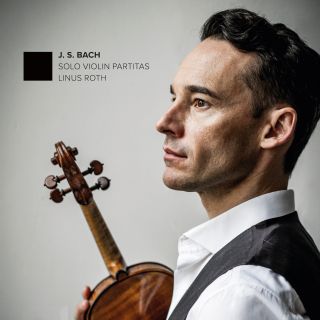 Catalog number: EPRC 0040
Releasedate: 01-04-22
- This record is the second part of both the Sonatas and Partitas, recorded by Linus Roth
- A historically informed performance

The cycle of six solo Sonatas and Partitas by J.S. Bach is arguably one of the most powerful and most important compositions in musical history. These works have been with Linus Roth since he was nine years old, when he first learned the Gigue from the E major Partita, moving on by the age of twelve to the first Fugue in G minor to tackling at fifteen the Ciaconna, which represents a cosmos in its own right. By seventeen, Roth had finally learned the entire oeuvre for the first time and since then he is fortunate to have been able to grow as a musician through the constant and welcome challenge of interpreting these remarkable works.

Bach did not write ‘Six Solos’ on the cover of the score, but instead wrote ‘Sei Solo’ in Italian, which can have two meanings: the word ‘Sei‘ can be translated both as the number six and also as ‘You are’. ‘You are alone’ - Bach is unlikely to have left something so important to chance or to be playing a simple word game. This announcement – if it is even to be seen as a reminder from the composer to the performer - must be taken seriously and Linus has always viewed it as an invitation to interpret the music as freely as the musical text allows, which for him became a guiding principle in his quest for his own interpretation.

This recording was made during lockdown, in which all of our lives have had to be reduced to a minimum in almost every area. The chance to renew the intense preoccupation with this miraculous music in preparation for the recording was a huge privilege as it allowed Linus an escape into a spiritual freedom which helped me greatly on a personal level at this time.

Not only did Roth's teachers and the interpretations of great violinists have a huge influence on how he plays Bach, but also his preoccupation with the original text and with what is known as ‘historically informed performance practice’, in particular the experience of playing with the type of convex Baroque bow that was used in Bach’s time. Due to its bend and the different weight distribution, it has a different nature to the concave curved bow used today, which leads to a slight decrescendo phrasing where several notes are slurred together towards the tip of the bow. In Linus' opinion, the modern bow suits the modern violin better and enables a wider range of sounds, which is why he tries to translate these Baroque-style experiences to the modern bow.

While the slurs and other details in the musical text were not always adhered to in years gone by, further meticulous examinations of the text have resulted in music editions that faithfully reproduce all the details of Bach’s handwriting, yielding fascinating results.

In Bach’s hands, the Partita, a series of linked dance movements, is transformed from music with the specific purpose of entertainment into art music.

Linus Roth, who received the ECHO KLASSIK Award in 2006 as ‘Best Newcomer’ for his début CD on EMI, was honoured with his second ECHO award in 2017 for his recording of the violin concertos by Shostakovich and Tchaikovsky with the London Symphony Orchestra under Thomas Sanderling.

Roth has made a name for himself internationally both in core clas- sical repertoire as well as for his discovery and rediscovery of works that have undeservedly fallen into oblivion. He has devoted special attention to the works of Polish composer, Mieczysław Weinberg (1919-1996), both in concerts and in the recording studio. In 2015 Roth founded the International Weinberg Society which organises and sponsors concerts, readings, exhibitions, interdisciplinary events and publications on Weinberg’s life and work. Linus Roth’s recording of the complete works for violin and piano by Mieczysław Weinberg was released to great acclaim in 2013 by Challenge Classics. It was fol- lowed by a recording of Weinberg’s Violin Concerto with the Deutsche Symphonie-Orchester under Mihkel Kütson and then the Concertino with the Württemberg Chamber Orchestra Heilbronn under Ruben Gazarien, both CDs being selected as a coveted ‘Editor’s Choice’ by Gramophone magazine.
For the centenary of Weinberg’s birth in 2019, Linus Roth was invited to curate two days of events dedicated to Weinberg at Wigmore Hall. As well as his chamber music, these events also included Weinberg’s six sonatas for violin and piano as well as the three sonatas for solo violin.

Linus Roth plays on the 1703 Stradivarius violin ‘Dancla’ on generous loan from the music foundation of the L-Bank Baden-Württemberg.