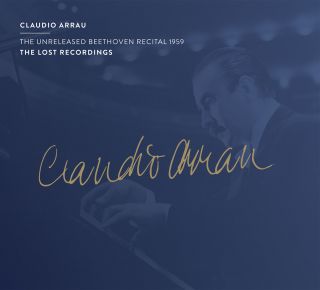 Catalog number: TLR 2103039
Releasedate: 23-09-21
- This concert is presented in its entirety as a world premiere (over 10 tracks are completely unreleased).
-  All tracks have been remastered from the original Berlin radio tapes using Phoenix Mastering ™ - a unique restoration process developed over 2 years by The Lost Recordings and Devialet teams.
The Lost Recordings has rediscovered the master tapes of this double recital in the archives of Berlin Radio. The label thus offers, as a world premiere, this Beethoven recital by the great Claudio Arrau, recorded on March 12, 1959 at the Hochschule für Muzik in Berlin, totally unpublished, delivering a breathtaking reading of the Farewells, the Appassionata and the Sonata Op. 110. An exceptional document. When Claudio Arrau took the stage of the prestigious Hochschule für Musik in Berlin on 12 March 1959, he was, at 56, an artist at the very peak of his fame and the pinnacle of his pianistic and intellectual powers. Rarely in pieces other than these solo works for piano, where sentimental confession, mystical revery and the constant concern for form are inextricably entwined, did Beethoven so clearly create a dramatic sound setting to depict common mortals grappling with their confused feelings, doubts and existential contemplation.

His creative genius transcended the contingencies and boundaries of a random condition to attain sublime, monumental heights. Arrau’s recital, imbued with grace, exhibited the perfectly mastered phrasing and weighty sound – driven by an implacable force – that conveys to our innermost selves the metaphysical dimension of these poetic, musical and transparently sincere meditations. Its three movements bear unequivocal names: Das Lebewohl (Farewell), Adagio – Allegro in D flat major; Abwesenheit (The Absence), Andante espressivo in C minor; Das Wiedersehen (The Return), Vivacissimamente in E Flat major. It refers directly to the brief exile of Archduke Rudolph of Austria in 1809, when he had to flee after the Battle of Wagram. It gives a close rendition of Beethoven’s changing moods in reaction to the situation of his student and patron, from his despondency when the leader departed to the joy of their reunion. Arrau delves into the emotional intricacies of the work like a sound designer, clearly accentuating the development and variations to give a narrative dimension to the composition. The slow movement is masterful in its profundity, ineffably melancholic in the variations of shade and subdued lighting. Without any superfluous sentiment, Arrau looks into the depths of the forsaken human soul. He achieves a restrained approach that still overwhelms us with emotion.

Claudio Arrau was born in Chillan, Chile on 6 February 1903 into a well-established, highly cultivated family of practising Catholics. He was barely one year old when his father, an ophthalmologist, died after a fatal riding accident. To support her three young children, Claudio’s mother began giving piano lessons. This meant that the small child was lucky enough to grow up to the pleasing sound of the piano notes. Seated on his mother’s lap as she taught, he was initiated him into the mysteries of music theory even before he learned to read and write. At the early age of four, he could play certain Beethoven sonatas on the keyboard. The young prodigy dazzled all who heard him with his exceptional gift for music. He was barely five years old when he gave his first public recital in Chillan with a programme of works by Mozart, Beethoven and Chopin. Just one year later, the President of Chile heard him play at a private recital. So impressed was he that he granted him a special state scholarship to study music in Germany for ten years. In 1911, eight-year-old Claudio, accompanied by his mother and sister Lucrecia, moved to Berlin, where he entered the prestigious Stern Conservatory. After a few unhappy experiences with teachers whose methods were ill-suited to the precocious genius, Arrau met Martin Krauze, the mentor he needed. Krauze had studied with Franz Liszt and befriended all the major musicians of his time. He was thus a prominent figure in the artistic life of Berlin, both a renowned piano teacher – another of his pupils was the legendary Swiss pianist Edwin Fischer – and a revered yet feared music critic. Pupil and master immediately struck up a close relationship. In Arrau, Krauze discerned raw talent that could be shaped according to his rigorous principles; the young boy, so far from his native Chile, found a figure of authority, a substitute for the father he had never known.

When in 1918 Krauze died prematurely aged sixty-five, victim of the Spanish flu, Arrau was only fifteen and once again fatherless. Feeling bound by loyalty to Krauze, he refused to study under anyone else and continued his piano studies on his own. Soon after, he made his concert debut at the Royal Albert Hall, and played in Berlin with the Berlin Philharmonic Orchestra under the baton of Karl Muck. Arrau undertook his first European tour with illustrious conductors such as Nikisch, Furtwängler and Mengelberg. In the eyes of his fellow musicians, he rivalled with Arthur Schnabel and Edwin Fischer, young pianists who were then revolutionising the art of interpretation.

For two consecutive years, aged sixteen and seventeen, he won the famous International Franz Liszt Piano Competition. Now basking in glory, in 1921 Arrau undertook a major tour of South America, making a triumphal return to Chile with a concert in Santiago. In 1923, he toured the US, giving concerts at Carnegie Hall, in Boston and in Chicago. Back in Europe, at the age of twenty-four he won the prestigious International Geneva Prize in 1927; among the jury members were none other than Alfred Cortot and Arthur Rubinstein. At this time he began making his first recordings. He extended his repertoire considerably, adding composers from Bach to Debussy, and including the great German romantics – Beethoven, Brahms, Schubert and Schumann as well as Mozart, Liszt, Chopin and Schoenberg. Early in the 1930s he toured the USSR twice. In 1935, now thirty-two years old, he further consolidated his reputation by playing a marathon cycle of JS Bach’s entire keyboard works over twelve recitals. This achievement helped restore the great composer’s reputation. In 1936 he played other cycles of complete keyboard works: Mozart, followed by Schubert and then Weber. In 1938, in Mexico, for the first time Arrau performed all Beethoven’s five concertos and thirty-two sonatas, an exploit that he was to repeat on numerous occasions. In fact, in the 1960s and 1980s, he made two recordings of the complete piano works of Beethoven.

In 1937, he married the German mezzo-soprano Ruth Schneider, with whom he had three children: Carmen, born in 1938, Mario, in 1940 and much later, in 1959, Christopher. Increasingly anxious about the war overtaking Europe, Arrau decided to flee Nazi Germany, going first to Chile, where he founded a music school, and then the US, where, after a triumphant tour, he decided to settle in 1941. This was the start of a new life – eventually, in 1979, he took on American nationality in addition to his native Chilean citizenship – as well as a crucial new stage in his career. At the end of the second world war, he began dividing his time between teaching, a very active concert career – with no fewer than some one hundred concerts worldwide every year – and intensive recording of all the major works of the piano repertoire, mainly with Philips.

Arrau was acknowledged as one of the very finest interpreters of Beethoven. He gave numerous public performances of the sonatas and between 1962 and 1966, recorded a first cycle of the complete sonatas that has become a legend. In 1978, deepening his bond with Beethoven, he published an Urtext edition of these sonatas with Peters, the first made by a composer since Arthur Schnabel’s 1935 edition. Such printed editions aim to reproduce the composer’s original interpretations as accurately as possible. In the 1980s, he began a new recording of the complete Beethoven piano works, one he sadly did not manage to complete.

Showered with honours and official awards from the world over, celebrated on the occasion of both his eightieth and eighty-fifth birthdays as one of the twentieth century’s living monuments of piano, Claudio Arrau maintained his usual stamina to his very last day, 9 June 1991. Over the last ten years of his life, he found new momentum that enabled him to make many recordings and return, yet again, to his welltrodden grounds, including the works of Debussy, Liszt, Chopin and Mozart. His last albums, some released posthumously, were recordings of Beethoven, Schubert, Debussy and Bach, whose work he was planning to go back to after a break of several decades. They all continue to ring out today, a rich artistic testament of a pianistic titan cut from a different cloth than that of mere mortals.