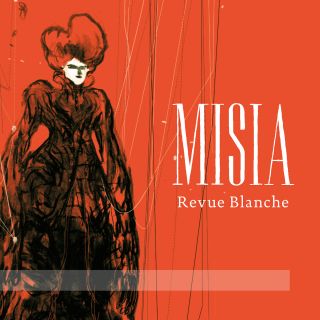 Catalog number: AR 030
Releasedate: 01-10-21
- A collection of music of turn-of-the-century Paris
- A combination of works by established, and lesser-known composers
- A journey, guided by Misia Sert

Ten years of Revue Blanche. That’s ten years of making music together.
Of exploring, brainstorming and challenging themselves, finding other soulmates and meeting audiences across the world.
Ten years, too, of sharing laughter and tears, having each other’s back, looking for balance, defining – and redefining – who they are.
But most of all, it’s ten years of friendship.

At the occasion of this anniversary, the ensemble is going back to their roots: to vibrant turn-of-the-century Paris, where a luscious body of music emerged that has occupied a central place in Revue Blanche’s repertoire since the very start.

Misia Sert became our guide. Walking in her tracks, Revue Blanche paid a call on Villa Servais in Halle – where she spent her childhood – and played a Polish song by her grave in Samoureau, near Valvins. While they encountered many iconic masters enchanted by her, she also put them on the track of lesser-known composers. With every step and every gem their curiosity grew, Misia seducing them to go beyond what they’d initially imagined. The present recording is Revue Blanche's homage to this fiery, unbridled spirit who – by devoting her life to the arts – perennially inspires others to do so as well.

The ensemble found working on this album a challenge as well as a saving grace in a year without concerts. The involuntary break from the stage allowed them to focus on the recording process, where they applied ourselves to making Misia a perfect tribute. Now it’s finally here, our hope is that the soundsketch of this grande dame, who truly mastered the art of bringing people together, will help answering to the profound need for beauty and connection felt by many.

Revue Blanche is a vocal/instrumental chamber music ensemble with an unusual and richly coloured combination of soprano, viola, harp and flute. Begun in 2010, the ensemble has made rapid strides winning the VRT-Klara Young Talent Award in 2013, the YAMaward in 2016 and recording their very well received disc ‘Shelter’.

The ensemble was named ‘Revue Blanche’, after the French art and literary magazine published at the end of the 19th century. White is the sum of the entire colour spectrum and hints at the idea of the blank canvas, anxiously waiting for opinions and reflections to be written upon it. This influential idea segues smoothly into the aesthetics this ensemble focuses on, resulting in an ongoing search for interesting repertoire. High quality arrangements emphasize the diverse colours of the different instruments.

It is clear that the ensemble’s ambitions are wide-ranging. Revue Blanche is not only a chamber music ensemble but is open to other contemporary art forms. It also produces multidisciplinary programmes fusing visual arts, dance, literature and electronic music. This hybrid approach leads to a unique way of experiencing various artistic tendencies of our musical heritage.