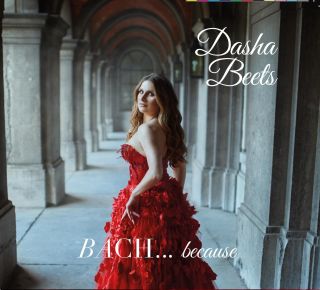 - This album combines three World’s greatest artistic traditions: European classical music,.ancient poetry and American jazz and blues.
- A jazz portrait of Bach
- Instrumental pieces by J.S. Bach which were never sung before are given a new, fresh,lyrical twist.
- Colorful arrangements with a variety of swinging rhythms, from bolero and cha-cha-cha,shuffle and jazzwals are surprising the listener with an interest in jazz and classical music
- musical interplay and improvisation create a one-of-a-kind experience full of unexpected little gems.

In this unique program, The Netherlands-based jazz singer Dasha Beets interweaves three of the world's great artistic traditions: European classical music, ancient poetry and American jazz and blues. Beautiful poems by great literary minds  have been translated into English by Dasha and combined with pieces by Johann Sebastian Bach, performing this repertoire in a completely new way. It's an enchanting program full of poetry and song, musical interplay and improvisation, a variety of swinging rhythms and the timeless melodies of Bach. The unique melding of artistic cultures, performed by musicians of the highest caliber, creates a one-of-a-kind experience full of unexpected little gems.
With a voice and irrepressible style which have capturedthe imaginations of audiences and criticsalike in Europe,Asia, Russia and the United States, Dasha Beets is poisedto secure a defining placeamong the most importantandoriginal jazz vocalists of our time.Born in 1986, Ukraine to musical parents–her mother avocal teacher and her father a jazz trumpetplayer–DASHA BEETS began studying classical piano at the ageof 7. She eventually graduated in2007 from the MoscowConservatory in Jazz Vocals. She went on to pursue herpost-graduate studiesat the Royal Conservatory in TheHague, the Netherlands, earning her Masters degree inJazz Vocalsin 2013. Since then, she has shared the stagewith such notable musical artistsas Rita Reys, SheilaJordan, Mike le Donne, Ack van Rooyen, Martijn van Iterson, Peter Beets, the legendary Ruud Jacobsand JoeCohn.In addition to her unique interpretations of cherishedstandards of the Great American Songbook,DASHA isalso a composer in her own right and has gainedunqualified acclaim for her captivatingcompositions inperformances at major jazz festivals throughout theNetherlands, Belgium andGermany. She made her NewYork debut in 2010, performing at Manhattan’s iconicjazz venue,Birdland, accompanied by the Steve Firthtrio.Recently she has turned her attention to the timelessanduniversally appealing music of Johann Sebastian Bach,creating jazz improvisations of some ofthe composer’smost lyrical works. Her latest album, “Bach...because,”is set to be released in April,2022.