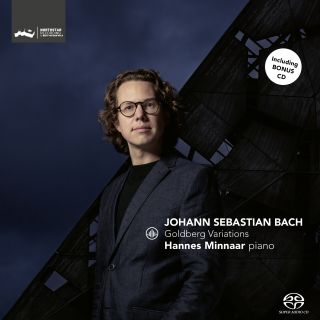 Catalog number: CC 72488
Releasedate:
- A Goldberg Variations for the 21st Century
- A new account of the Goldbergs by Challenge pivotal pianist
- A performance that inputs new visions within a picture that respects the score and the interpretative tradition
- Including a bonus CD with works of Daan Manneke

We at Challenge are proud to present a new account of Goldberg Variations by critically acclaimed young pianist Hannes Minnaar.
His rendition of Goldbergs sums up all the features of a ‘contemporary’ interpretation at the highest degree:
- Transparent, detailed, and crystal-clear phrasing: each and all notes are discernible.
- A supreme – but not artificial nor mannered – control and care of tone and sound: touch, colour and timbre are all fruit of a clearly deep insight and work.
- A smooth flow of the discourse: a solid overall concept of the work structure and a plain, simple (never emphasized) ‘singing’ of the melodic line. (Even when he takes a very slow tempo – as in the famous Variation no. 25, about 30% slower than usual – he always sustains the melody, that means it is not the tempo that makes the melody living, but the capacity to make it flow, to ‘connect’ sounds and silences).
- These Goldbergs are not told as a narrative: it is not a dramatic tale, but the architectural structure is well visible. It is not a story, it is a three-dimensional visual art work.
- Northern Star gave Minnaar the sound that perfectly matches his concept of the work. The rest is made by the unique Chris Maene piano.
A ‘Goldberg’ for the 21st Century.
A convincing tonal colourist and ardent Romantic. He’s a natural talent with a bold streak.’ — Gramophone on Minnaar’s debut solo album with works by Rachmaninoff and Ravel

Dutch pianist Hannes Minnaar is consistently described by the critics as being able to convey musical essence in all its purity. They talk about his spontaneity and naturalness, an ease without superficiality. ‘My overall approach to music is to take a score very seriously, which is not the same as taking it literally. Pianists from earlier days are a constant inspiration in that respect. I admire such artists as Alfred Cortot, who does not position himself between the composer and the piece, yet leaves an unmistakeable mark on the music. Wilhelm Kempff’s aural richness and trueness, for example, is an example of something I aspire to.’

In Spring 2019, Hannes Minnaar performed on the renowned Master Pianists Series in Amsterdam’s Concertgebouw; as the first Dutchman in 20 years. Hailed by the national press as an undisputed success, NRC noted his playing as ‘free of bluff and swagger’ and ‘in deference to the music at all times’. BBC Music Magazine proclaimed his second solo album their Choice of the Month, saying: ’Underlying Bach’s contrapuntal wizardry is a compelling emotional narrative’. On the third solo album, Gramophone wrote: ‘Minnaar’s identification with Fauré’s unique realm of music is complete and his deeply felt interpretations shine with clarity and infinite nuance.’ His album ‘Nox’, containing works by Schumann, Zuidam and Ravel, prompted a flurry of five star reviews in the Dutch press. Het Parool wrote: ‘He joins the ranks of the great pianists of our time’.

Minnaar first gained attention as second prize winner of the Geneva International Music Competition 2008, and third prize winner at the Queen Elisabeth Competition 2010. The influence from his teachers including Jan Wijn, Jacques van Oortmerssen and Ferenc Rados, and masterclasses with Menahem Pressler profoundly informed his performance inspiration. Among conductors, Minnaar has worked with Herbert Blomstedt, Antony Hermus, Xian Zhang and the late Jirí Belohlávek. He collaborates with all major Dutch orchestras including the Royal Concertgebouw Orchestra, and orchestras throughout Europe. Minnaar was made a Borletti-Buitoni Trust Fellow in 2011, and he received the Dutch Music Award in 2016 – the highest honour bestowed upon a classical musician by the Dutch Ministry of Culture.

Vitally important to Minnaar’s musical raison d’être is his work with the Van Baerle Trio, founded together with violinist Maria Milstein and cellist Gideon den Herder in 2004. Nominated by Amsterdam’s Concertgebouw, they were ECHO Rising Stars 2013–14. The 250th anniversary of Beethoven has been a major focus for Minnaar in recent seasons both in performance and recordings. His discography includes Beethoven’s complete piano concertos, violin sonatas and piano trios.