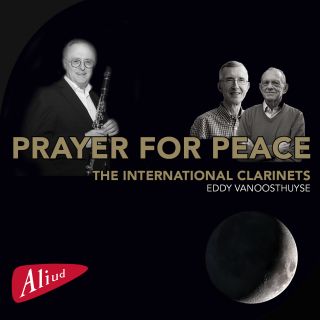 Catalog number: ACDOE 1212
Releasedate: 03-06-22
- This Clarinet Choir is one of the best in its kind world wide and recorded in Immersive Sound for use within platforms as Binaural, Auro 3D and DolbyAtmos!
This CD came to be due to the huge respect that Eddy Vanoosthuyse has for the both Roeselaarse composers. He came to know them throughout different time periods of his career: He met Raymond Ducancq at a young age as a conductor and composer and immediately they developed a strong mutual respect for each other. Raymond dedicated a number of pieces to him and conducted a number of his works for Harmony Orchestra’s both at home and abroad. It’s via this connection that he recorded ‘Nostalgia’ with the Presidential Orchestra of Lithiuana (Orchestra of the Lithuanian Armed Forces) in the period that he was chief guest conductor. Vanoosthuysehas has a great deal of respect for this humble conductor. Vanoosthuyse came in contact with Willy Soenen through a common friend (Guido Six). It goes without saying that the two developed great respect for each other. Vanoosthuyse conducted a number of pieces for clarinet choir and harmony orchestra composed by Soenen. Willy dedicated ‘Concertino for Eddy’ to him after which he created ‘Midwest Clinic’ in Chicago.
The International Clarinets was founded in 1998 by Eddy Vanoosthuyse. The group is exclusively comprised of students and former students from this Belgian clarinet virtuoso. Throughout the years the ensemble has been comprised of musicians from Belgium, the Netherlands, Luxembourg, Germany, France, Spain, Portugal, Greece, Lithuania, Italy, Poland, Norway, Iceland, Ukraine, Bulgaria, Hungary, Russia, Algeria, Israel, Turkey, Iran, Iraq, Thailand, China, Japan, South-Africa, Venezuela, Colombia, Uruguay, Mexico, Chili, Peru, Cuba, Argentina, USA and Austraia. Many of these musicians currently hold prominent functions in international orchestras, universities, conservatories and higher music institutions spread across 5 continents. The group has performed in Belgium, the Netherlands, France, Spain, Italy and the US. Initially the ensemble was founded to provide a platform for students to play together, however the group has now grown to be one of the leading clarinet choirs in the world, with a repertory which is being internationally covered.