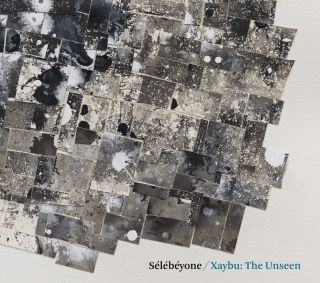 Catalog number: PI 95
Releasedate: 04-11-22
- the highly-anticipated sophomore release from Sélébéyone
Xaybu: The Unseen is the highly-anticipated sophomore release from Sélébéyone, the international avant-rap collective comprised of MCs HPrizm (New York City) and Gaston Bandimic (Dakar), and saxophonists Steve Lehman (Los Angeles) and Maciek Lasserre (Paris). Described as “legitimately new” and a “revelation” by Pitchfork, the group’s eponymous 2016 debut was hailed as a game-changing synthesis of underground hip-hop, modern jazz and live electronic music. On Xaybu, Sélébéyone – which means “intersection” in Wolof – continues to build on its groundbreaking work with shifting rhythms and state-of-the art sound design, now with a newfound sense of effortless fluidity. The result is a profound musical statement that deftly explores spirituality and mysticism through the lens of experimental music.

The word “xaybu” in Wolof refers to the concept in Islamic mysticism of al-Ghaib – that which is unknowable and unseeable. HPrizm, Gaston Bandimic, and Maciek Lasserre are all Sufi Muslims, and that spiritual connection and sense of abandon and giving in to the unknown has been a cornerstone of the group since its inception. The Senegalese filmmaker Djibril Diop Mambéty is heard on the track “Djibril” describing his creative process, which directly reflects Sélébéyone’s own artistic ethos:
It’s very simple. You must close your eyes.
Have you closed your eyes?
You see points of light. Close them tightly.
Each time that you want to see the light, you must close your eyes.
(Translated from French)

Throughout the album, the voices of master musicians like Billy Higgins (on “Gagaku”) and Jackie McLean (“Go In”) – both of whom converted to Islam – are heard speaking to the complex relationship between their spiritual and creative practices. The nuance of those connections is reflected in the otherworldly sonorities and intricate compositional structures that permeate the record. Nearly unheard of for projects of this scope, Lehman and Lasserre not only handle all of the instrumental writing, but also every aspect of the production on their respective pieces, including drum programming, sampling, and overall sound design. The result is an unprecedented integration of complex compositional forms, pre-recorded samples, and electronic sounds. And after multiple tours throughout the United States and Europe, the group has also cultivated a repertoire of hard-won performance strategies that make radical shifts in tempo and texture feel organic and inevitable.

An award-winning saxophonist and composer, Lehman – who holds a doctorate in composition from Columbia University – is widely celebrated for his “sure-footed futurism” (New York Times) in the domains of modern jazz and contemporary classical music. Here, he showcases yet another side of his astonishing creativity in producing and overseeing nearly every aspect of Xaybu. The project makes frequent use of advanced compositional techniques and cutting-edge improvisation: Each aspect of Lehman’s musical identity is an inextricable part of this artistic statement. Pulling this off requires enormous trust and commitment among the musicians, which is only possible through Lehman’s longstanding musical relationship with the members of the group. HPrizm (a.k.a. High Priest), a legend of New York’s underground hip-hop scene and a founding member of Antipop Consortium has been one of Lehman's closest collaborators for almost two decades. Saxophonist Maciek Lasserre, began studying with Lehman in 2005 and introduced him to the burgeoning Senegalese hip-hop scene in 2010. Lasserre later urged Lehman to include Gaston Bandimic – one of Senegal’s most distinctive young rap stars – as a founding member of Sélébéyone. Drummer Damion Reid has also been an integral member of Lehman’s ensembles since 2006. His innovative drum set adaptations of J-Dilla beats on Robert Glasper’s In My Element (2007), are often cited as the beginning of the “drum set as MPC” wave amongst the current generation of young drummers. True to form, Reid’s playing on Xaybu is remarkably adept at moving back and forth between electronic and acoustic textures – check out his work with brushes at the beginning of “Dual Ndoxol.” Pieces like “Gagaku,” “Zeraora,” and “Gas Akap” highlight Reid’s improvised interactions with both saxophonists in a series of explosive duets.
Tracks like “Djibirl” and “Lamina” feature unconventional sonic landscapes that throw HPrizm and Bandimic’s searing lyricism into relief. Both integrate contemporary notions of Islamic mysticism into their rhyme schemes, and frequently mine profound connections between spirituality and artistic practices. On “Liminal” they calmly navigate a meticulously-crafted quagmire of polyrhythms and Lehman’s characteristic razor-sharp saxophone lines. Percussive accents drift in and out of time, ebbing and flowing one moment, and snapping into the grid the next. On “Souba,” Lehman’s experience in the contemporary classical music realm comes to the fore, with the subtle orchestration of harp, strings, flutes, and percussion, deftly shadowing the rhythmic nuance of Gaston’s rapid-fire verses.
Lehman reflects on the evolution of Sélébéyone: “When we first came together in 2016, I think we really had to work hard to see if this thing could even work, not just in terms of finding a way to perform together on stage, but even the artistic viability of it all. But, this time around, it really felt like we already know how to do this and we know what we’re about. And for that reason, there was very little discussion about how we were going to bring the second record to life. And even the guiding principle of xaybu/al-Ghaib emerged almost on its own. That fascination with the invisible, the imperceptible, the kind of concealed elements of spirituality and creativity is what really ties us all together. And I think this album kind of represents that on-going search for music that we haven’t heard before and that doesn’t sound like anything else.”