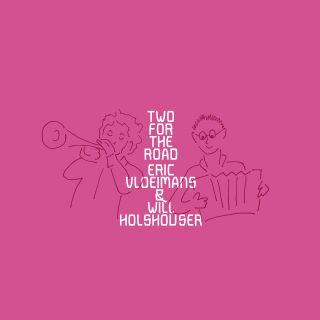 Two For The Road

Accordion and trumpet - instruments that complement and compliment each other - while reflecting the charm and quirks of their players :  Will Holshouser from the USA, steeped in folkmusic,  jazz and avant-garde;  Eric Vloeimans from the Netherlands, evoking the brass band sound as well as the serene melody of a classical instrument.  Mix in some Middle Eastern spices and the Muppets and what do you have ? A recipe for great fun on a road trip.

After their first get together on a whim in 2017, Eric and Will hit it off immediately, performed a few concerts for the fun of it and recorded their first album "Eric and Will" more or less on the spot :

Vloeimans' "expressive, astonishingly nuanced playing is present and accounted for here, so if you have not made his acquaintance, this s as good a place as any to start...In Holshouser's hands, the accordion functions almost lke a portable B3...he gets so much sound and rhythm simultaneously." - Mel Minter, Musically Speaking.

Of course Eric and Will wanted to carry on with this collaboration, but The Pandemic put the brakes on the planned US tour in 2020. They did manage to play thirty gigs in the autumn 2021 in the Netherlands. This album, titled "Two for the Road" is culled from live recordings on that journey.

Now they are getting in gear for the twice postponed and much anticipated US leg of their musical ride, starting on September 11th in Asheville, NC and ending on October 2nd in Seattle, Washington - a cross country and cross musical adventure
which will leave no one cross at all.

Eric Vloeimans (trumpet) is one of the best-known musicians in his native country, the Netherlands. He has led a wide variety of ensembles over the years and is a frequent guest soloist with bands and orchestras of all kinds. He has won four Edison prizes (the “Dutch Grammy”) for his recordings and has toured throughout Europe, Asia and the US with his own groups and artists such as Mercer Ellington, John Taylor, Peter Erskine, The Rotterdam Philharmonic Orchestra, Wayne Horvitz, the Royal Concertgebouw Orchestra and many others.

Will Holshouser (accordion) is a veteran of the New York music scene who has performed all over the world with artists including violinist Regina Carter, clarinetist David Krakauer, and improvisers Han Bennink & Michael Moore as well as with his own projects. He has also performed with Antony & the Johnsons, Kiran Ahluwalia, Uri Caine, Guy Klucevsek, New York City Ballet, New York City Opera, Martha Wainwright, Loudon Wainwright, Suzanne Vega, and others.