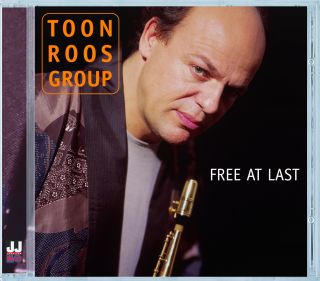 Catalog number: JJT 77020
Releasedate: 15-04-03
Artist: Toon Roos, Karel Boehlee, Peter Tiehuis, Boudewijn Lucas, Michel van Schie, Danny Sahupala, Sebastiaan Kaptein, Martin Verdonk Dutch jazz saxophonist and composer Toon Roos (1964), considered one of our contemporary greatest (Coen de Jonge, editor JAZZ magazine), started his international career with his performance at the North Sea Jazz Festival in 1984. In the same year he received the Dutch Jazz Wessel Ilcken Prize and a tour abroad followed immediately. In the course of the years, Toon Roos has performed and recorded with a.o. the Toon Roos Quartet, the Amsterdam Jazz Quintet and many international jazz artists such as Toots Thielemans, Kenny Werner, Vince Mendoza and George Mraz. The past few years, he has been particularly striking as a member and soloist of the Dutch Jazz Orchestra. In 2001 the prestigious Bird Award was presented to Toon Roos at the North Sea Jazz Festival: ÔToon Roos belongs to the best tenor sax players of Holland. He's multi-faced, plays in the most diverse ensembles, and when it comes to command of the sax, he stands out from all the rest. There is an enormous expressiveness in his performance. His instantly recognizable sound on the tenorsax is round and flexible. Toon Roos disposes of great harmonious insight, fluent melody and robust timing. Although his roots are traditional, Toon Roos is part of the modern generation of jazz musicians who know no stylistic borders, and with that is a worthy exponent of the current state of affairs in jazz music.' Ð text from the Bird Award jury report Finally Toon Roos presents his new CD 'Free At Last' on JJ-Tracks. On this funky album, the new Toon Roos Group reaches the highest possible inspiration with its sensual fusion. The heat they produce is especially felt in the live recordings on this album that also contains some overwhelming studio tracks. Combining the acoustic and electric elements of jazz, funk, rock and Latin music, this group creates a very personal sound. Most of the songs on the album are composed by Toon Roos and keyboard player Karel Boehlee. Toon's band members have accompanied world-top artists such as Prince, George Duke, Randy Crawford, Toots Thielemans, Gino Vanelli and Chaka Khan. Listen to the miracles happening as they meet in the Toon Roos Group.