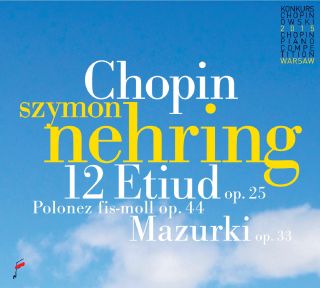 - honored, among other awards, with the Audience Prize, a finalist from the most recent Chopin Competition, Szymon Nehring is the only Pole who found himself among the top ten; the winner of scholarships and competitions in Poland and abroad, he has unquestionably joined the elite of Polish pianists from the younger generation

- the disc includes, among other works, the Mazurkas op. 33 and the complete Etudes op. 25


Poland had three contestants left in the Third Stage of the 17th International Fryderyk Chopin Piano Competition, and only one went through to the Grand Final concerto round. So the country’s hopes were resting on Szymon Nehring, and although few would have tipped him as a winner he enjoyed understandable support in the hall and countrywide, winning the Audience Prize in the final analysis. The Kraków-born pianist, who had just turned 20 when the competition opened, certainly aroused interest with his playing. Reviewing his Second Stage appearance in the Chopin Courier, Kacper Miklaszewski said, ‘The search for subtlety took away a bit of clarity from the interpretations of Szymon Nehring, who nevertheless built a convincing dramaturgy in the Polonaise in F sharp minor.’ Getting across all the hurdles in this most demanding of competitions, Nehring certainly proved his worth by the time he stepped out to play the Piano Concerto in E minor in a performance that mixed muscularity and gracefulness. Showing qualities that in retrospect can also be found here in performances recorded earlier in the competition, he found the sweep of the concerto’s first movement and the dreaminess of the second, before dispatching the rhythms of the finale with a natural, native flexibility. It was a well-rounded performance that justified his place as a laureate.
Born in 1995, in Cracow, he began learning piano at the age of five. He is currently studying with Stefan Wojtas at the Academy of Music in Bydgoszcz.
He has won numerous prizes and distinctions, including in the International Chopin Competition for Children in Jelenia Góra (2008, Second Prize),
‘Chopin +’ in Budapest (2010, First Prize), ‘A Step to Mastery’ in St Petersburg (2011, Third Prize), the Chopin Competition in Narva (2012, First Prize and the EMCY prize) and ˚ychlin Festival (2013, Second Prize). In 2014, he won First Prize in the ‘Arthur Rubinstein in memoriam’ Competition in Bydgoszcz, Second Prize in the ‘Premio Academia’ in Rome, and First Prize and a distinction for the best performance of a Chopin nocturne in the ‘Halina Czerny Stefaƒska in memoriam’ Competition in Poznaƒ. In 2015 he won a special award for the best Polish pianist, a distinction and the Audience Award in the 17th International Fryderyk Chopin Piano Competition in Warsaw. He has performed as a soloist with symphony orchestras in
Jelenia Góra and Tallinn, and also with the Warmia-Masuria and Jelenia Góra philharmonic orchestras (in Chopin’s Concerto in E minor). He is a recipient of grants and scholarships from the National Children’s Fund, the ‘Sapere Auso’ MaΠopolska Scholarship Foundation, the ‘Pro Musica Bona’ Foundation and the Ministry of Culture and National Heritage.