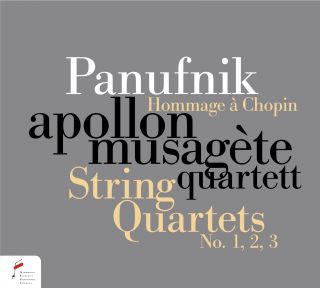 Aside from the composer’s complete string quartets, the CD contains Hommage à Chopin in a version for flute and string quintet.

The ensemble’s debut CD was released in 2010 under the Oehms Classics label to great critical acclaim and received a number of awards. The quartet has also recorded works by Lutos∏awski, Penderecki and Górecki for Decca Classics, receiving glowing reviews from the press. In 2014 Oehms Classics released the Quartett’s CD Russian Soul, featuring works by Tchaikovsky, Prokofiev and Shostakovich. Their live recording of Beethoven and Weber

as part of the BBC Proms in London was released in 2016 as a the BBC Music Magazine CD. Apart from their regular concert activities, the Quartett has participated in the CD Night of Hunters by the American pop singer Tori Amos on Deutsche Grammophon. The album was awarded the ECHO Prize in 2012 and was followed by a joint tour through Europe and America.